WE CAN FIGHT CLIMATE CHANGE

After having worked on Thank You For The Rain for nearly seven years, we wanted to use the film to create real change.

In 2017, along with the film's international release, we launched an international impact campaign aiming to build climate resilient communities, strengthen the climate justice movement, and push policymakers to take steps to stop climate change and support frontline communities.

Since then, so many things have happened! In 2019, our film campaign won the DocImpactHi5 award, which celebrates documentary films that have made real world impact. Below are some highlights of what we have done. For more details, please see Doc Society's extensive impact case study on our campaign.

In East Africa, Kisilu and Christina are using the film to strengthen and expand their work in building climate resilient communities locally. This involves building earth dams and irrigation projects as well as the community screenings with farmers. We aim to use the film as a tool to create an arena where farmers, NGOs and local decision makers can meet to identify local challenges and discuss suitable climate solutions. Take action by supporting Kisilu and Christina's community work here.

Thank You For The Rain has helped students around the world better understand the issue of climate change. The idea of climate justice is rarely included in the climate change education, and we have made educational toolkits available to be used with the film, linked to national curriculums in UK, the US, Canada and Norway. Head on over to our Schools page to learn more!

Despite being the ones who are most affected by climate change, frontline communities are rarely allowed an equal opportunity to influence international decision-making processes regarding climate change. Kisilu has been invited to a number of international conferences to speak about his experiences as a farmer and climate activist, among them COP23, TEDGlobal, and the EAT Forum. Interested in inviting Kisilu to an event? Send us a message!

There have been a large number of community screenings organized by NGOs, activists and civil society groups around Europe. Feedback from organizers suggests that Thank You For The Rain's personal approach to climate change makes a powerful impact on the audiences, and helps bring home an issue that is often seen as complex or distant. Want to organize your own screening? Read more about Community Screening options here.

In 2019 and 2020, we are excited to partner with Climate Justice Resilience Fund (CJRF) and partner organisations in East Africa. Our main goals for the period of 2019-2020 are: 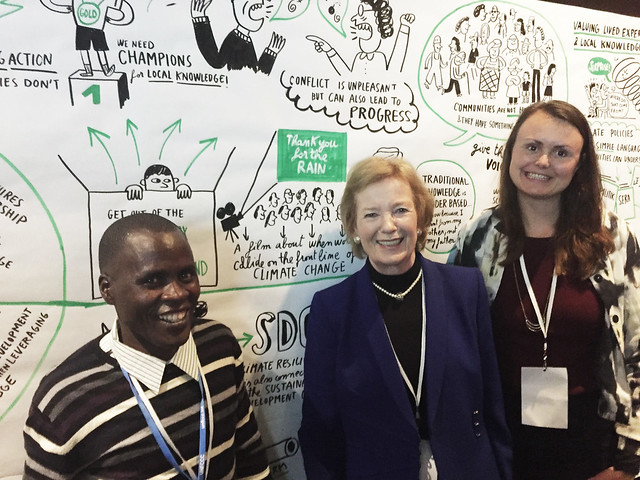 Thank You For The Rain